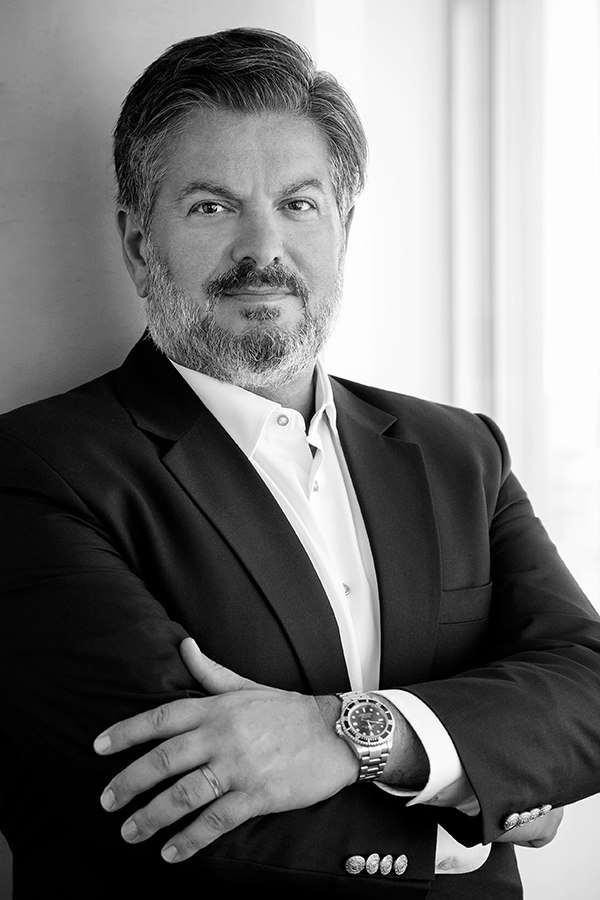 Vice-Dean
School of Faculty of Pure and Applied Sciences, University of Cyprus

Leondios Kostrikis is a Professor of Biological Sciences at the University of Cyprus and Head of the Laboratory of Biotechnology and Molecular Virology. He was born in and lived his first years in Ashia of the Mesaoria valley in Ammochostos District. He received his B.Sc. (1987), M.Sc. (1989), M.Ph. (1990) and Ph.D. (1993) degrees from New York University (NYU), United States (USA). This was followed by post-doctoral research at the Aaron Diamond AIDS Research Center of Rockefeller University (New York) on the molecular virology of Human Immunodeficiency Virus. He joined the faculty of the Aaron Diamond AIDS Research Center (ADARC) as a Staff Investigator in 1998 and the Rockefeller University as an Assistant Professor in 1999. He returned to Cyprus in 2003, joining the University of Cyprus. He was a Fulbright Scholar for his undergraduate studies in the US and received scholar awards from the Elizabeth Glazer Pediatric AIDS Foundation, the Aaron Diamond Foundation and the Patti Cadby Birch Trust in the USA. In 2005 he received an Honorary Distinction from the J. William Fulbright Foreign Scholarship Board, USA for his accomplishments which have contributed to the betterment of the world. He was among the forty Fulbright scholars selected from 250,000 Fulbright alumni from 140 countries since 1946. He is an Editorial Board member for thirteen international journals, and has served on numerous study sections and committees for European and international grant agencies and charities. He is a cofounder of the European Society for Translational Antiviral Research (ESAR), the founder of the Cyprus HIV-1 Transmission Cohort Study (CHICS) and a scientific member of the global WHO-UNAIDS Network for HIV Isolation and Characterisation. Ιn 2019, he was elected as Founding Member (Chair of Biological Sciences) of the Cypriot Academy of Sciences, Letters and Arts and in 2020, he was elected as Member of the Biosciences Steering Panel of the European Academies Science Advisory Council, EASAC.

Overview of Research and Scientific Accomplishments

Emerging and re-emerging human infectious diseases including viral infections constitute an ever-increasing public health threat with devastating socioeconomic consequences of global proportions. In the last forty years alone, humanity has witnessed a number of devastating viral epidemics such as those caused by Human Immunodeficiency Virus (HIV), the virus that causes the Acquired Immunodeficiency Syndrome (AIDS), Ebola virus, Zika virus (ZIKV) and most recently 2019-nCoV among many others. HIV currently infects significant fractions of the worldwide population and causes chronic disease resulting in a major burden to public health. In the last twenty years, combined antiretroviral drug therapy (CART), has been developed to specifically target HIV-1 with outstanding success, resulting in a dramatic decrease in mortality among HIV-1-infected individuals. However, the genetic variability of HIV-1 constitutes the most striking challenge in effectively treating HIV-1 infection. Specifically, the accumulation of drug resistant mutations during suboptimal therapy severely affects the clinical benefits of CART, leading to therapy failure and potentially the transmission of drug-resistant HIV-1 strains to newly-infected individuals. Furthermore, the transmission dynamics of HIV-1 in human populations in different geographic regions is important in formulating tailored prevention policies including preventive antiretroviral treatment strategies.

For more than two decades, Prof. Kostrikis’ research efforts focus, on a translational research program that characterizes human genetic and viral factors responsible for major global viral infectious disease threats, that studies the molecular dynamics of HIV-1 infection and the global spread of HIV-1 drug-resistance and that translates this knowledge into novel therapeutic interventions. Over the years, Prof. Kostrikis has made significant contributions to the study of human genetics in the transmission of HIV-1 and disease progression, the global molecular epidemiology of HIV-1 infection and global transmission drug resistance. He is considered as one of the world’s pioneers and top experts in establishing the role of human genetics in the transmission of HIV-1 and progression to AIDS. He has made seminal contributions by creating innovative nucleic-acid-based molecular methodologies and applying them to demonstrate the important implications of natural polymorphisms found in human chemokine receptor genes in the transmission of HIV-1 and disease progression by utilizing well-established American and European HIV/AIDS study cohorts. The results of his studies have a direct impact on the clinical care of HIV-1-infected individuals including Cypriot patients and underline the world-wide dedication towards achieving the goal of diminishing new HIV-1 infections and AIDS by taking full advantage of the therapeutic and preventive effects of combined antiretroviral drug therapy. Prof. Kostrikis has now turned his attention to novel concepts in HIV-1 vaccine development and prevention of HIV-1 transmission.

Prof. Kostrikis work also focuses on the molecular detection of coronaviruses. During the SARS coronavirus (SARSCoV) outbreak in 2003 in China and Canada, Prof. Kostrikis applied cutting‐edge technology to develop a novel method for the molecular detection of the SARS coronavirus as well as other SARS‐associated coronaviruses, which was patented in the United States in 2010. Since the onset of increased COVID‐19 infections in late 2019, has been building on this technology to develop a versatile and adaptable platform that through molecular testing will effectively and accurately detect viral strains of Covid‐19 and potentially other infectious agents. Due to his expertise, since the start of the COVID‐19 epidemic in Cyprus, he also serves as a Member of the Scientific Advisory Committee of the President of the Republic of Cyprus for COVID‐19, in formulating science‐based recommendations and guidelines for containing and managing the epidemic in Cyprus.